Last Sunday's basketball turnout rate is kinda disappointing, as there were only 6 of us: Andre, Derrick, Jorge (Davis), Boris, Kwok Weng, and I. It was kinda expected, as the dark clouds were hovering above the sky - just like the gigantic saucer in ID4. :-P 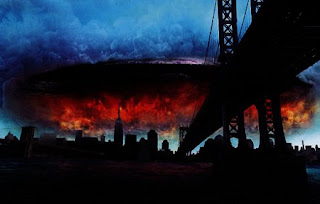 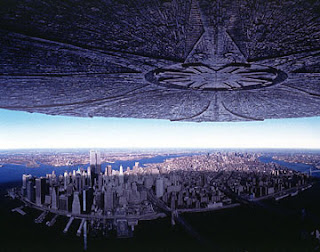 As expected, when we were about to start our 3-on-3, 8-point, best-of-5 game, it started drizzling. There are pros and cons playing in the rain. Pros - it was cooling, we did not get tired or thirsty that easily, and it slowed down the game. Cons - it was bad for catching a cold, and it was too slippery that we might end up tripping or spraining our ankles.

The team setting was like this: Andre, Derrick, Kwok Weng vs Jorge, David, Boris. My team won two games, but due to my many mistakes, we lost two games thereafter. On the fifth game, we were leading with 7-6, when we were kicked out of the court, firstly because it was late (about 8pm), secondly because the rain was getting heavier. Unofficially we won. A tiring game indeed - my inner thighs are still aching now.

Next, we had dinner in TGIF. We happened to know that day itself, that it was Kwok Weng's birthday. Since it was Kwok Weng's first time in TGIF, he was not aware of what he would go through. We knew... heheh! And so, Kwok Weng ordered a serving of chicken fettucini... (sorry, Andre, what was that sauce?), while the rest ordered hamburgers with fries. What a hearty meal! We were also busy watching Astro sports channel on the Closing Ceremony of Beijing 2008 Olympic Games. I was also doing something online with my wife (my laptop lar...).

And finally, the show began. The TGIF waiters and waitresses, 4 of them altogether, came and presented Kwok Weng with a chocolate cake for birthday. With a price - to stand on the chair and sing a song in front of everybody, and to blow the candle from a distance of, like, 2 metres. He was very shy in the beginning, but after much nudging, he sang at last - the first two lines of the chorus of the song 童话 (by Michael Wong). We forced him to encore (so bad are we). After that, it was the usual birthday presentation by the TGIF people. It's quite fun watching them do it, and that time I was video recording it using my cell phone!

According to Kwok Weng, that was his first ever birthday celebration. I'm so glad that I gotta celebrate his birthday together with all of us bunch of new friends (with the exception of Boris). Yep, I only knew him for barely one month. Hope that we could celebrate with him in future. Ahh... perhaps next celebration with either Boris or Kevin (passed liao)... in TGIF again! Muahahahah!!! 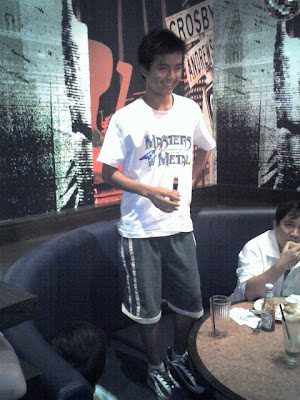 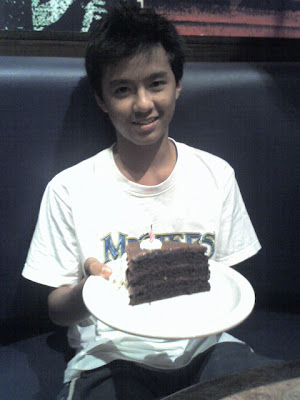 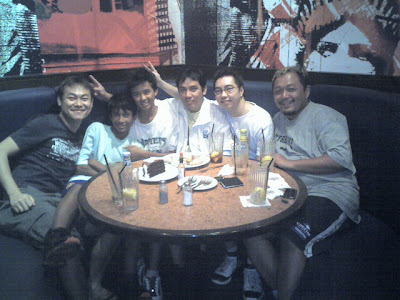 Written, Edited and Produced by David Chan at 11:30 PM