Against Comfort Zone and Fear

[ In due respect to all parties, I would make the people mentioned in this article as anonymous as possible. And, mind you, since I have stopped using pseudonyms, A is NOT Andre, and B is NOT Ben. :-P ] 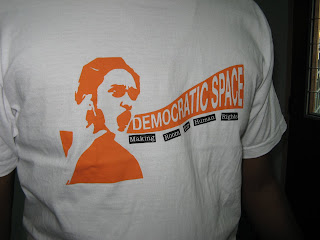 Today marks a month since our church (the Cathedral of the Holy Spirit) launched the Anti-ISA campaign. Alarmed by the arrest of one of our fellow Catholic MP for Seputeh constituency YB Sdri Teresa Kok last month, our church has responded with a Mass for Peace and Justice - inviting all the faithful in Penang Island District to come together, followed by the calling for prayer for anti-ISA, followed by exhibition booths for sale of Aliran magazines and anti-ISA badges, and distribution of yellow and purple ribbons as a sign of the anti-ISA spirit. 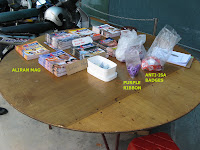 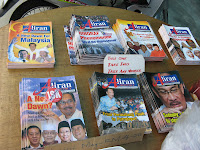 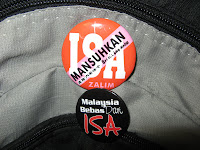 In order to further deepen the awareness amongst the parishoners, Assistant Parish Priest Fr Fabian Dicom deliberately put up his reflection into the first column of the weekly bulletin, titled "A Matter Of Conscience". I will not post the reflection here because you can find it in 5xmom's blog.

While some of us are pro human rights activism, we also found out that there are some who called themselves Christians are against the anti-ISA movement. There are anonymous feedbacks (actually, it is not that anonymous, if we really trace who received those feedbacks first-hand) that:

1. Comments that politics and religion should not be intermingled.
2. The parish priests are just too much, causing chaos more than peace.
3. Certain parishoners group together to pray so that the priests could stop the campaign.

Well, to the anti anti-ISA people, a few points that I want to elaborate here so that you can re-consider your stand. By the end of day I really hope that you could proudly proclaim with your heart that "you are a Christian".

Number 1. I am going to echo what has already been shared by two of my friends in church - with more elaboration, of course. Imagine this hypothetical dialogue:

A: I strongly disagree that Fr Fabian went that far, and now mingle into politics. Politics and religion CAN NEVER be mixed like rojak!
B: Tell me, what if one of your family members are caught by ISA?
A: Aiya, that can never happen la... we never talk politics, sure we won't kena, why bother?
B: Are you sure?
A: What do you mean?
B: Tan Hoon Cheng was doing her job, reporting the truth. Like that she also kena caught. Are you sure you will never kena?
A: Haiya... who ask Tan Hoon Cheng to become a reporter?
B: So, A, that means you despise Tan who speaks the truth la... and you don't want to tell the truth la, so that you won't have any shxt on yourself la, am I right?
A: ...

Number 2. We all should be aware of the current ISA detainees who are now suffering in Kamunting just because they speak the truth. And they were agonizing in pain just because they have the guts to fight for justice and fairness. Justice and fairness that we are still enjoying at the moment. You can read about one small part of their agony here (feasting on barbecued snake and birds).

If we say that the church should only focus on Christian rituals and rites, then we have missed three points. First, Jesus came to give us life to the fullest (John 10:10b), and to declare a 'year' of jubilation in the person of Himself (Luke 4:18-19) - NOT to bind us with rites and rituals! Second, who are we to tell others "padan muka" when we do not have the guts to speak for our own freedom? Third, WHERE is our sympathy? Where is the charity? Where is the brotherly love that we Christians are called to manifest? Are we going to be the Jewish rabbi that ignored the injured or the marginalized, or be a much hated yet good Samaritan that lends a helping hand from the bottom of his heart?

Our church calls us to put our faith in action. A faith based on the Truth which is Jesus Christ, our Lord. Many times, Jesus calls us not only to have faith, but to do His work according to our faith in Him. If we are to play safe and avoid doing things that might harm our comfort zone, whatever comfort we have could be taken away from us. Remember the one talent that the servant buried (Matt 25:24-30)? Being afraid is NOT an option. Jesus is also called the Lion of Judah. If we have faith that the Lion will save us, why are we afraid?

Number 3. If we pray for the priests to stop the campaign, we would be telling God, "God, please stop Your holy men from speaking about Your Son Who is the Truth!" Do you think God would answer such prayer? If you do, then you seriously do NOT know God.

One point that we ought to remember. 2000 years ago, Jesus could have just said in the Garden of Gethsemane, "Father, I don't feel like it. Dying for the people... uh uh, I don't think so!" He did otherwise. He did complain (by requesting the chalice to be taken away from Him), but he obeyed the Father ("Thy will be done"). Are we going to respond by telling the priests, "Praying for abolishment of ISA... uh uh, I don't think so"? Or, are we obedient enough to echo, "Fiat" - "be it done according to Thy will"? Are we willing to fight for the life and freedom that Jesus freely gave us through the shedding of His Blood?

1. I categorize this post as Amen (it means Christian Faith lar...) and Rakyat, and not Politics. This is simply because the anti-ISA campaign is a campaign to fight for human rights amongst the rakyat.

2. I think the following event needs some publicity, so that we know how crafty those "special guests" could be. During the Gospel Reading on the Mass for peace and justice, there were people who came late for the Mass, and wanted to go into the church to catch what the priest has to say during the Homily. The "special guests" told them off, saying that "there is nothing happening", and shooed them and told them to go home. I'm very sorry to the "special guests", but the message would still go through.

Written, Edited and Produced by David Chan at 11:32 PM

There is also a letter to the editor in The Herald about this issue. Actually, the two weeks ago, I did write a reply to lambast those who go on and on and on about not mixing politics and also how insistent they are in using Latin and not allowing BM. But since I wrote in the 'lambast' manner, I don't expect the editor to publish my mail. Still, I managed to get it off my chest.

David, thanks for linking me in your post on CG. I hope to post more photos soon. Had a friend with a really big zoom camera walking in front of the altar snapping away.

It's good to find local Catholic blogs. I hope you wont mind that I linked you on my blog.

I was there at the anti-ISA Mass. You can find my reflections on it here if you're interested. Don't mind the comments because it got out of hand towards the bottom.

lilian - Perhaps you could post your rants/lambasts in your blog too. Hehe...

andrew - You're welcome. I happen to Google and found yours on the second of the list (the top is lilian's of course). I agree that your blog post is a bit jammed up by a jerk. Wanted to reply, but you and Don have already covered much. No point arguing as he wound never listen - just pray for him. And, of course I won't mind. Btw, I'm linking yours to mine as well... ;-)