One word for me to summarize for the trip. Enjoyable. The following was the full actual itinerary, as far as I could remember. 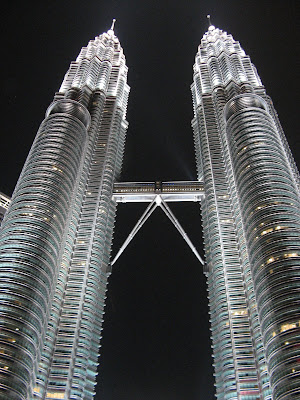 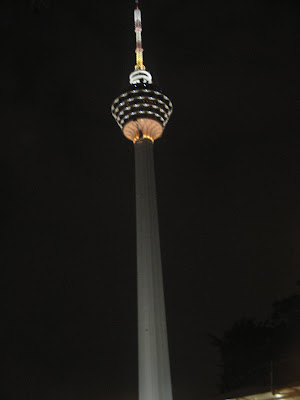 The most enjoyable part is, no doubt, the musical. Taking off the two setbacks, the musical was entertaining, funny, touching, and awesome. B, can you comment how much you enjoyed the musical here? Hahaha... 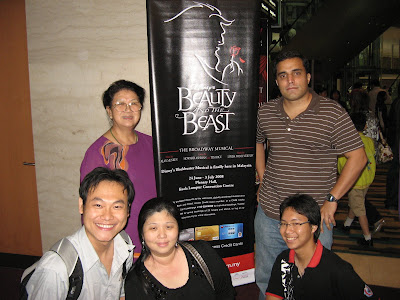 The ice skating session was good. Other than jam-packed with hundreds of people (kids, teens, and adults - uncles), the skating session was fun. B managed to transfer some of his normal roller-skating skills for his new ice skating technique, making him less awkward. Within minutes, he managed to skate without holding on to the side of the skating rink. JRoldan was a bit less fortunate - he need to hold on to the side almost all the time, until B and I encouraged him to let go. Indeed, he tried, and all was well - he's able to grasp part of the techniques before feet pain and fatigue took over. 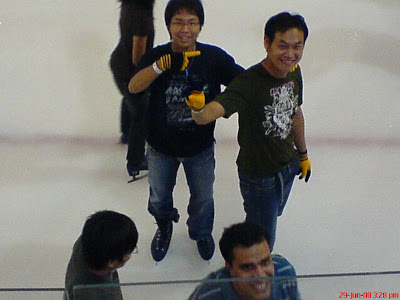 The fish spa was one of the most funny and ticklish experience. Imagine having hundreds of small fish nibbling at your feet and calf. I began the spa with laughing and giggling out of ticklish feeling all over my feet. Even the non-ticklish B was giggling. Anyways, after a few minutes, we quickly got used to it. Result - our feet got smoother and fairer - yeah, the fish had practically eaten our dead skin away!! For RM30 per half a hour, it is considered a good deal - imagine, we were in Pavilion!! I suppose it could be more expensive, considering the rental, maintenance, and constant re-purchase of the fish (this type of fish never breed in captive, according to A). 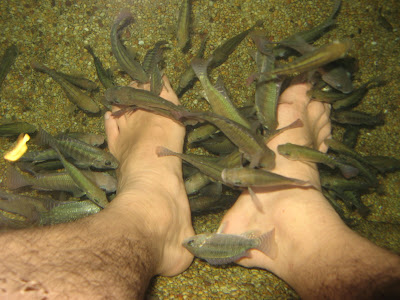 The Times Square Indoor Theme Park was the worst experience throughout the trip. I thought of wanting to have fun with the roller-coaster. For two rounds B and I rode on it. After the second round, my motion sickness took over me. Perhaps I had too much food during breakfast - I felt nauseating until I threw up a bit. Other than the Bumper Car session after the throw-up, the rest of the time we spent in the theme park loitering. During that time, we stopped by a wax sculpture stall, and it ended up that each of us bought wax sculpture of our own hands. LOL!

The experience on the Renaissance Hotel Club Floor was awesome and wonderful. One of the best thing in the club floor facilities was the room. The room that we had was spacious, and the bed was - ahh... I attempted to act according to Ling's response upon lying on the bed (during the previous trip of A, B, D and Ling, without me), and B felt disgusted... Hahahah!!! 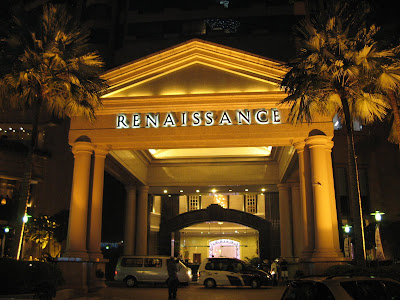 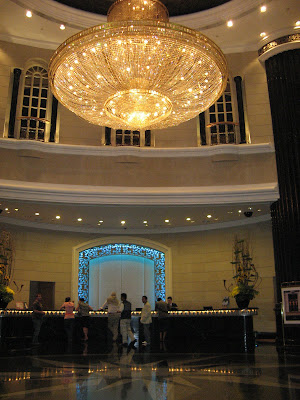 Next, the breakfast buffet was fantastic - I couldn't describe it much. We went to the West Wing breakfast buffet on the 2nd day, and the East Wing one on the 3rd day. Look at the pictures. Btw, beef bacon, turkey ham, bread, and yogurt would be my most favorite food there. Yummy!! 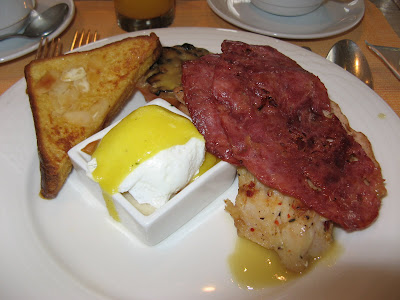 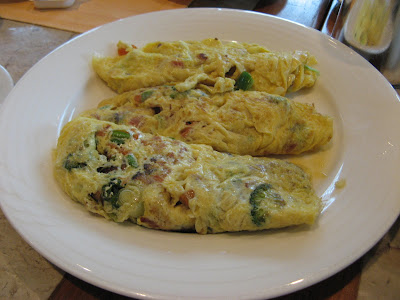 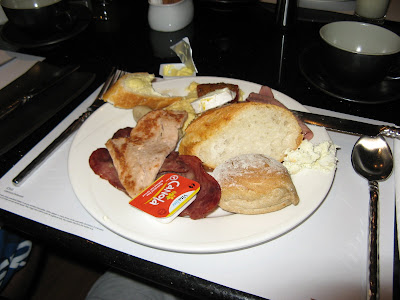 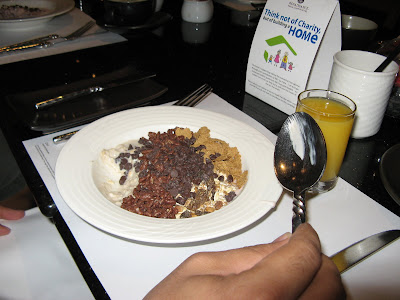 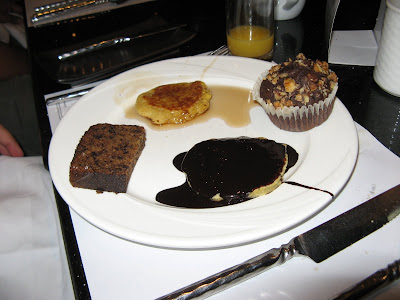 Third day breakfast - East Wing
The cocktail - I have not had so much alcohol for so long. I did not have a liking of alcohol because it would cause me to have headache. However, looking at the variety of types of cocktail they served in the Club Floor, I went ahead and tried some. The Tequila Sunrise was the killer. I had 1/3 glass, and guess what - I was drunk, and headache took over! LOL! 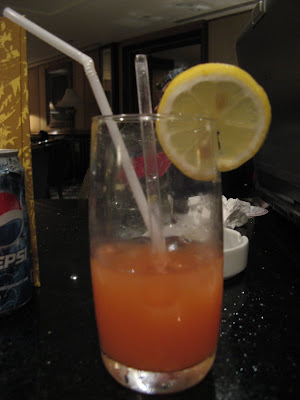 Tequila Sunrise - The cocktail that made me drunk
And finally, the recreational facilities:

1. Gymnasium - it was fully equipped with treadmills, cycling machine, free weights and complete set of workout machines (there are at least 20 of them!!). 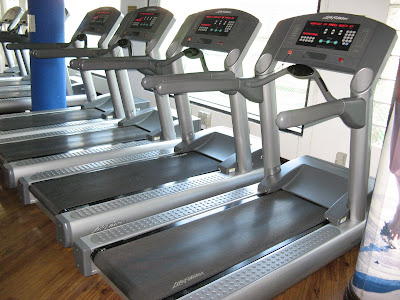 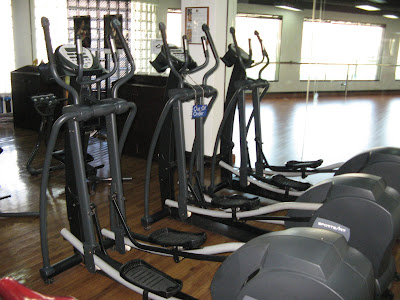 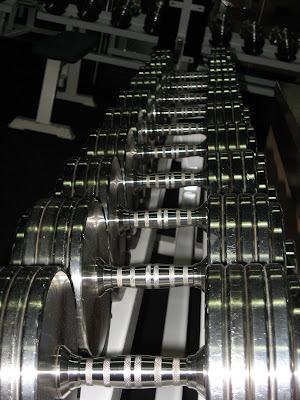 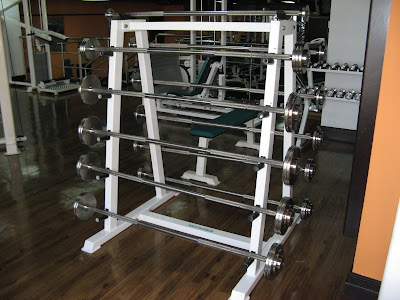 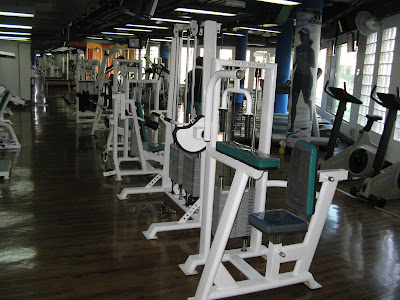 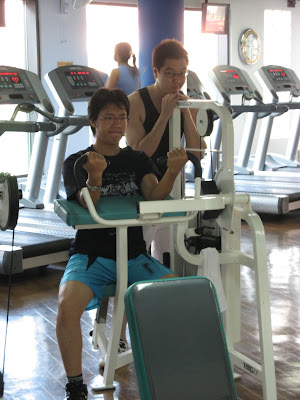 3. Spa and sauna room - a place for relaxing.

The one great food outlet that we enjoyed in KL was the seafood noodle in Segambut. There were 3 flavors - plain soup, tom yam, and curry laksa (in KL, curry with santan is called "curry laksa"). I loved the last one the most. Btw, the bowl was huge... Each large portion cost RM16, mind you. 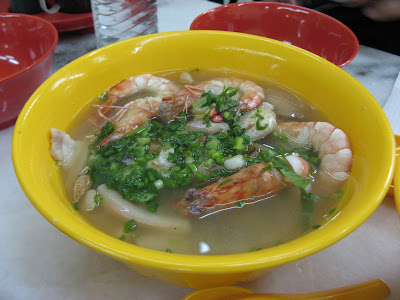 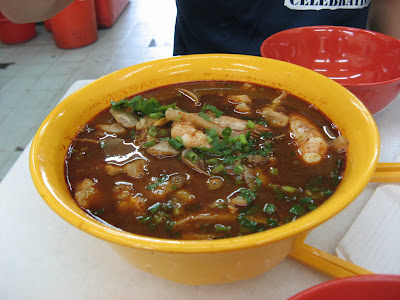 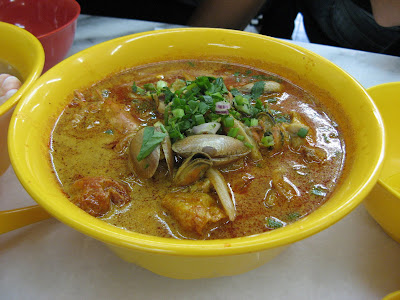 Other than that, all other food that we had was nothing exceptional. Although I managed to have my delicious Burger King's Whopper Jr. in KLCC, B, Dell Guy and JRoldan did not agree with me. They ordered something else and it was pathetic. Sigh... what to do? After a not-so-good experience of food in Planet Hollywood, here comes another round of disappointment. Btw, Planet Hollywood used to serve great dishes 4.5 years back! Deterioration - probably an effect of inflation... Sigh again...

The Ipoh passing-by food experience - I couldn't comment much because I am an Ipohite, and I always love Ipoh food. A, B, A's mom, Dell Guy, MissG, and JRoldan did enjoy the dim sum in Foh San very much. Let me guess their favorite dishes - yam kuih (芋角), fried carrot cake (炒萝卜糕), glutinous rice with chicken (罗米鸡), braised-pork bun (蓝乳饱), char siew bun (叉烧饱), and prawn dumpling (虾饺 / 虾卖). I am not denying - I love all of them!! 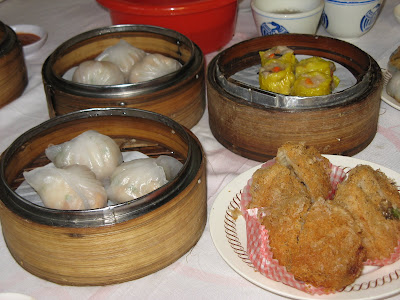 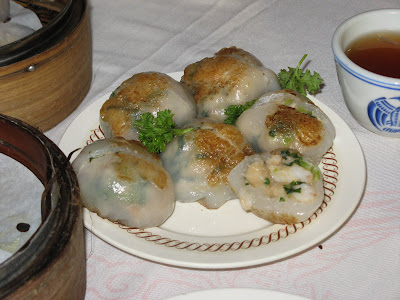 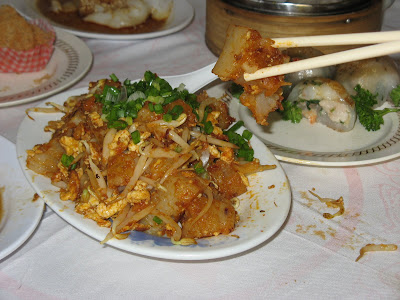 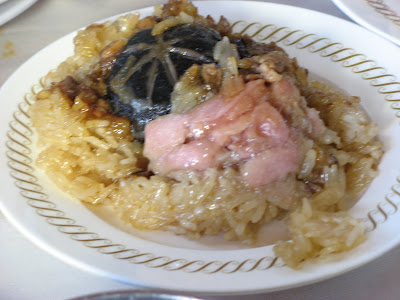 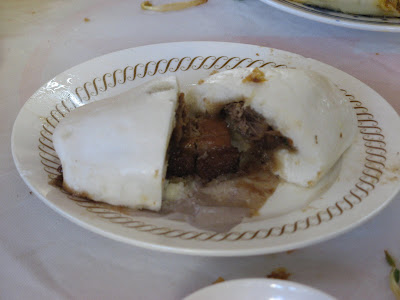 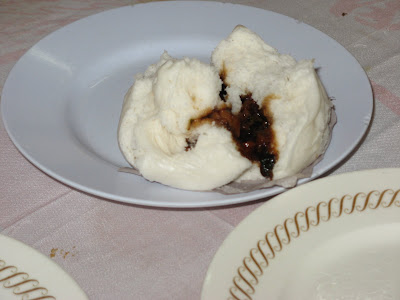 And, because of MissG and JRoldan having to return earlier than the rest, they were not able to savor the beansprout chicken and hor fun in Low Wong. Again, not much comments - not because I don't like it, but rather because I love it very very much!! Okay la... a few comments. I always liked the spring onions mixed with beansprouts and mixed sauce (soy sauce, sesame oil, and some of the 'chicken essence' - boiled chicken soup I guess), seasoned with cut red chili and pepper. Slurp... My family used to order 2 portions of beansprout whenever we went there. 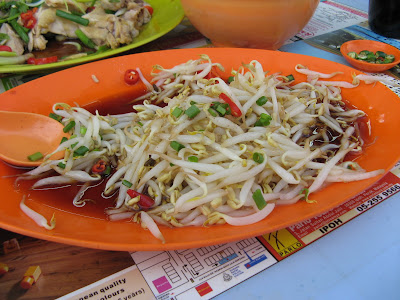 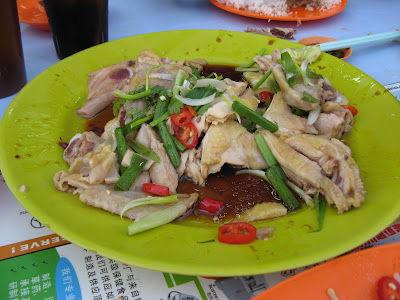 Looking forward to another eat, play (and sleep) trip!! And I'm definitely not talking about Redang here. :-)
Written, Edited and Produced by David Chan at 12:31 AM

Yeah ..... the "dim sum" breakfast is really really good (in fact, am a "dim sum" lover). And I do agree with you on the seafood noodles, the last one was the best of all.

Haha, that picture of Ben and Derrick is funny... :)

STILL wish I could have been there, DARN! :(

Aren't those fish a type of "talapia"?

Darn, if you have invited me along, I really would had beaten that guy up. No one's gonna mess up my pretty hair. :p